United States Has Highest Rates of Fatalities on Roads

Across the world, the United States has seen the biggest spike in traffic deaths. The United States is now leading the entire globe in increased traffic deaths and one of the primary causes is distracted driving. That’s the result of a new study that incorporated 29 different nations to arrive at these results. 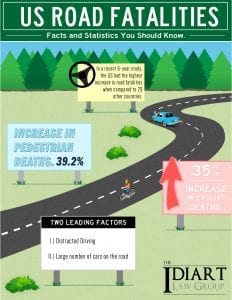 Only five of those 29 countries saw a jump in traffic deaths from 2010 to 2016 but the highest rate of increase was associated with the United States. That’s according to the study completed by the International Transport Forum. Argentina had the second highest increase around the world in traffic deaths at 9% and Chile also experienced a 5% increase.

The United States was also home to the highest spike in pedestrian deaths during the same time period with 39.2% and there was also nearly a 35% increase in the deaths for bicyclists. There are two primary factors that are leading the push for greater fatalities in the United States. The first has to do with distracted driving and the other has to do with the fact that there are more cars on the road now because of an improvement in the economy.

If you or someone you know has already been seriously injured in a vehicle accident, you deserve to share your concerns directly with a personal injury lawyer who will help to represent your best interests and allow you to file a personal injury claim to recover compensation. When there are so many factors to consider in the pursuit of a personal injury claim, it pays to choose an attorney who can help you.

Fatalities on U.S. roads may not always be true accidents- if the remaining family members can show that one or more parties were responsible for the injuries, this leads to a personal injury lawsuit known as a wrongful death claim. A wrongful death claim will never be able to compensate families for their ultimate loss but can help with the financial difficulties faced by loved ones.